Hire a Nerd to solve your problems &
get A+ Grade

Thank you for your interest in our services! We will be in touch shortly 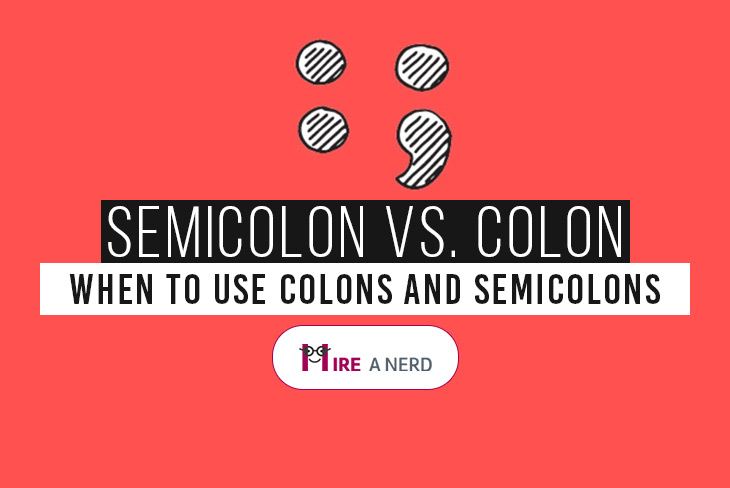 Semicolon vs. Colon: When to Use Colons and Semicolons

Intonation is the melodic utterance pattern which conveys differences in over-expressive meaning and serves a grammatical function. Some examples of intonation are – delight, anger or surprise.

A writer uses these punctuation over a specific sentence to include clarity and precision in writing. First, let's look at the contrasting comparison –Semicolon vs. Colon.

The colon is punctuation used to place an example or offer comprehensive information in the sentence.

Let us consider these two sentences –

You can use a colon after expressions like – as follows, following and the

But you must not use a colon after the following terms – "that is", "for example", "such as", and "including".

The colon comes into play after a dependent or independent clause.

Colons may link two different phrases or clauses, moving one step ahead from the first clause to the second.

You might use a colon between two independent clauses if the second clause changes the first one.

Colons are also helpful to indicate a formally announced quotation.

You can also use a colon before a definition, an explanation or a list that precedes a clause.

Colons are also applicable in the following situations –

The purpose of a semicolon is to join relatable concepts with a similar grammatical structure.

Let’s look at this incorrect example –

This homework is additional credit only, but we still need to hand it in.

Although the pair of clauses is related in the above sentence, using a semicolon is pointless since the coordinating conjunction "but” joins these clauses.

In this case, you can either use the semicolon or the conjunction, but you cannot work on both.

A semicolon joins a pair of independent and related clauses substituting a comma and a coordinating conjunction. Let’s look at the following example –

This homework is added credit only, but we still need to hand it in. (without a semicolon)

This home task is extra credit only; however, we still need to hand it in. (with a semicolon)

John finished all his assignments, but Kathleen did not finish hers.

You can write this same sentence like the following –

John finished all his assignments; Kathleen did not finish hers.

However, you should never use a semicolon between a dependent and an independent clause. You cannot write –

Although Fiona is a kind employee, that new guy is not.

You can use a semicolon to replace a period between two related sentences. The second sentence should begin with either a transitional expression or a conjunctive adverb. Some of these expressions are –however, furthermore, besides, therefore, accordingly; thus, that is and otherwise.

Incorrect usage – My dog is sick. It won't eat, run around, or jump, nor will it go for a walk with me.

Let's look at another example where semicolons can enhance readability, such as –

If each item within the series is lengthy or includes commas, you can use semicolons to replace those commas.

You can see that the individual elements within the list of the above sentence are complex and include several commas. You'll find it is hard to identify where one element ends, and the other one begins.

Let's look at the more preferred example, such as –

Angela loves many breeds of dogs, including small dogs, such as terriers and beagles; medium dogs, such as border collies and cocker spaniels; and large dogs, such as Great Danes and mastiffs.

Now, these are the basic comparison between colon and semicolon.

Also Check: What Are Modal Verbs?

Application of Colons and Semicolons

You can use punctuation like colons in sentences to express something that follows, such as a quotation, an example or a list.

He kept repeating: “I will not return home”. (Using a colon)

They faced many troubles, so they couldn't make it further.

Now, let’s look at some examples to clarify your doubts on “when to use semicolon vs. colon?”

The sentence that follows the colon should describe the matter discussed before the colon.

You use colons while working with lists such as -

Quotations also use colons to describe words spoken by someone else,

You can use colons to separate a pair of independent clauses which stand alone as a pair of wholesome thoughts. Let’s check the examples carrying a pair of clauses –

Now you must have a clearer idea about when to use semicolon vs. colon.

Hire the Experts at Hireanerd.net

If you are still perplexed about the application of colon vs. semicolon in English, all you need to do is get in touch with our experts for a doubt clearing session.

Hireanerd.net offers resources that provide comprehensive information about colons and semicolons. Their detailed explanations of the nature, importance and application of punctuation marks are vital for students to learn the basics of writing English.

In addition, you can avail several documents that cover other additional topics on grammar usage, spelling and more.

Your email address will not be published. Required fields are marked*

Enter your email address below to subscribe to my newsletter